NO available handles. Next sale will be announced when available.

Handles will be shipped only to the paypal address. Please be sure it is correct. Do not ask to change it. No way.

Just a note to say thank you for the wonderful handles. Photos are enclosed and I just wish I was a good enough photographer to do them justice. 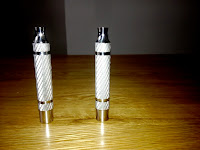 Just to recap I wrote to ask if you could craft a handle that was reminiscent of the classic Gillette Common Bar handle. I love the looks of that handle, which I have on my Gillette "New" but find it too light and felt a heavier handle would improve the shave. That said I wanted a handle reminiscent of the common bar in looks as I felt it suited the new head. I was very pleased to learn that Rafael was interested in taking up the challenge of producing a modern steel take on the original gillette handle 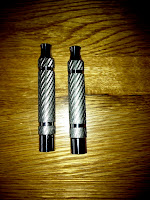 Rafael, a busy man always then spent much time and effort working in producing a tribute to a common bar producing three prototypes. The first was scrapped and I was asked to pick between the second and third. I asked for the third and then asked if I could take the second too as the handles were just stunning. The knurling is beyond comparison; grippy enough to do the job but shallow enough to look very classy indeed.

I have used prototype three and it proved my theory to be totally correct. It elevated that shave I get from my long comb head to new heights.  I have not yet used prototype 2 but imagine I will get similar results. I am considering pairing that with a tech head but first I will try it with an Edwin Jagger head.

Photos are attached as I said earlier. Proto 3 has the new head and proto 2 has the EJ head. 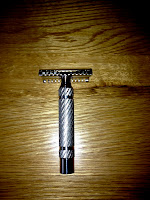 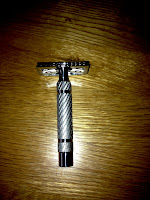 I would just like to thank Rafael for his craftsmanship, Juan for his helpfulness and both of them for being such gentlemen. 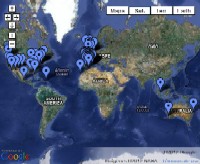 ESTE ES UFO - THIS IS UFO

Él lo hace todo - He does it all